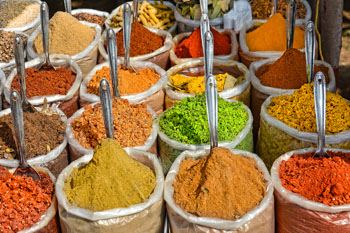 Flavourings are used to flavour food. They come in various forms and can take a liquid, powder or paste-based format, depending on how they are to be used.

In addition to their flavour components, for technical reasons flavourings also contain other substances such as liquid or solid carrier substances to enable better measurement into portions.

Flavourings are concentrated products and as such are not suitable or intended for direct consumption.

It is worth mentioning that with industrial or commercial use, flavourings are generally applied at a ratio of 1:1,000.

This means that 1 g of flavouring is sufficient to flavour 1 kg of food.

In this context, it is also important for the flavour components contained in the flavouring to account for an average of 10 – 20 % of the overall flavouring.

This means that 0.1 g – 0.2 g of flavouring substances are sufficient to flavour 1 kg of food.

As a result, only trace amounts of flavourings are consumed.